Part three of assignment five of the SLAE has us performing the final analysis of the Linux/x86 shellcode payload from msfvenom: linux/x86/exec

Just like in part one and part two we must first generate our shellcode to perform our analysis on!

As with the previous blog entires in the SLAE series, we start off by generating our shellcode and immediately converting it to base64 for easy transport between computers.

The msfvenom command used was as follows: 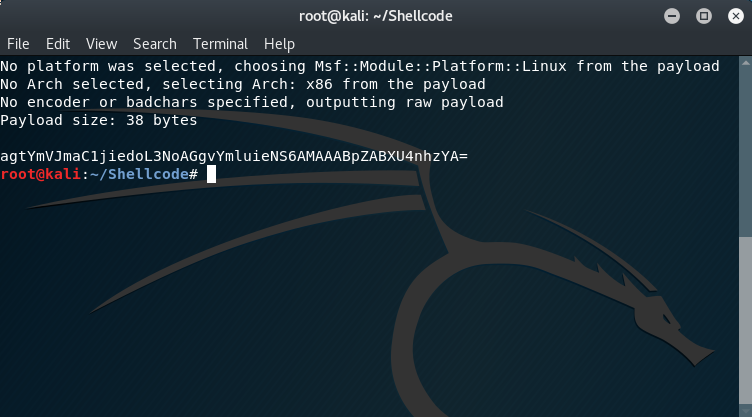 after moving the base64 encoded contents into a file on the x86 Ubuntu VM I converted it back to raw with:

followed by the following command to start to analysis via ndisasm:

which produced the following disassembled output:

Given how small this block of code is we are going to try something different this time and just work through each line at a time to see if we can’t get a handle on what this shellcode is doing!

These two lines should look pretty familiar at this point as this is the value of the function to call being popped into the eax register, which is 0xB (decimal 11).

If we investigate what this value represents by referencing /usr/include/i386-linux-gnu/asm/unistd_32.h we will see that it is making a call to the execve function

which has a C function signature of:

There are several things we need to revisit about making a call to execve. The first is that the first parameter, filename, just needs to point to a memory address containing the value for the command to execute (/bin/sh). The second parameter is where the real magic is happening as we will need to point to a memory address that contains the following values: [/bin/sh, -c, id]. The third parameter in our case can simply be null since we won’t have any environment specific information to pass into the function.

Lets start by diving into the code and figure out how to make all of this happen!

The very next instruction we encounter is:

The value stored in the edx register will end up being incredibly useful to us throughout the code block since this parameter will end up being null as we have no environmental settings to pass to the function, or the equivalent of an ‘\0’ that we can use over and over to push to the end of any string (char array) we need to null terminate…

Speak of the devil, the very next instruction has us pushing edx (‘\0’) onto the stack in order to null terminate the instruction that comes after it (since this is x86 / little endian)!

The previous instruction may seem a little weird at first, but as we will eventually need to store the values currently in esp in ecx we are going to need to offload it to another register that we can later move to ecx since we are about to need to use the stack again for a bit…

Now that we have offloaded the previous value of the stack to edi we can now freely push “h/sh “ and “nib/” to the stack which will actually end up logically translating to: /bin/sh since we are dealing with x86 / little endian.

After this we see the following commands:

This instruction will move esp (or the address pointing to /bin/sh) to the register ebx, which in our C code is parameter const char *filename!

After which it immediately pushes a null onto the stack in order to null terminate the string!

At this point in our code we have now accounted for both ebx and edx and our function call looks like the following:

Another thing to keep in mind as we keep moving forward is that the value of the register edi is also currently (logically) set to: -c\0”

Having said all of that it is at this point we again face several instructions that look a little suspect:

If you were thinking these just didn’t look like they could be the correct instructions then you would be spot on, as we once again have some mangled instructions due to a string being in the middle of these commands. Our original command to execute was id which just so happens to translate to the hexadecimal characters 0x69, 0x64 and 0x00!

If we run the following command:

it will indeed output:

After accounting for the hex values of 0x69, 0x64 and 0x00 we are left with the following hexadecimal values to re-translate into assembly code for analysis: 575389E1CD80

Feeding those values back into ndisasm with the following command:

we get the following output:

These set of codes definitely look much better!

At this point we push edi, but why, what is in edi? Well, edi currently contains -c and by pushing it we are logically causing the stack to currently look like [-c, id] which is just one element away from being done!

After pushing edi we unsurprisingly push ebx which has the value /bin/bash.

Next up we move the address of the stack (esp) into ecx which means we now have [/bin/bash, -c, id] stored in ecx!

After the mov ecx,esp our function call now looks like:

At this point we are ready to make the call to execve, which is rather convenient since the very next instruction is int 0x80, which is the interrupt command which will indeed fire execve and execute the id command!

The linux/x86/exec shellcode from msfvenom performs the following steps:

Just for completeness I have also included the final disassembled assembly code after accounting for id throwing off the disassembly: